Last held in 2018, World Taekwondo hosted the 2022 World Taekwondo Junior Championships at the Arena Armeec in Sofia, Bulgaria from August 2nd to 7th, 2022. The event featured over 800 athletes between 14 and 17 years of age from 90 different countries.

Canada’s World Championship performance was led by Noah Nacsa’s bronze medal in the Male -48kg division. Nacsa kicked off his competition in the Round of 64 against Morocco and advanced to the Semi-Finals after victories against Iraq, Sweden and Great Britain. After a high scoring match, Nacsa fell to Thailand’s Pornpawit Toruen, earning him a bronze medal. Canada also earned a quarterfinal placing from Maude Ricard in the Female -46kg division. 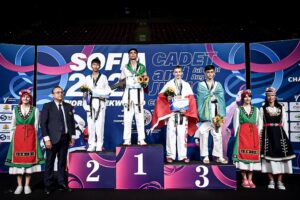 The Junior World Championship event showcased the World’s best talent and marked a significant stepping stone in the high performance pathways of Canadian athletes. Taekwondo Canada’s High Performance Director Dr. Allan Wrigley shared his thoughts on the team’s performance and the event, “We had a young Junior team at this event, with many of the athletes still having one or two more years of Junior eligibility. The experience of fighting the World’s best in Sofia will better prepare our athletes for their next step along the Performance Pathway. We will be assessing the success of this event based on what these athletes are able to do over the next six to eighteen months as we want to see how they can take the lessons learned at the World Championships and then work with their coaches to accelerate their development.”

Taekwondo Canada would like to congratulate and thank all the athletes, coaches and support staff that attended the Sofia 2022 World Taekwondo Junior Championships!