This past weekend, the 2021 Canadian Poomsae Team members met virtually for their first team orientation of the year. The team was introduced to this year’s coaches and also reviewed logistics and plans. With representation across Canada, the goal is to assist all our Poomsae athletes with our newly developed four-pillared poomsae program and Sport Canada’s LTAD approach.

The 2021 Taekwondo Canada National Poomsae Team is eager to participate in the upcoming World Taekwondo Online Poomsae Challenge Series. The Challenge Series will be held throughout the year with competitions occurring in March, June, September and December. The team will be led by Coach Bhajan Mann, Coach Ri Seong Kang, Coach Lois Fong and Coach Seoung min Rim. 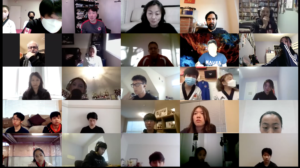 With Taekwondo Poomsae continuing to grow in popularity, the Canadian National Poomsae team members are excited to represent Canada on the global stage. They continue to train hard as they set their eyes on international success.

The first series of the competition kicks off at the end of March with Junior divisions represented by Gordon Cheuk, Christine Cho, Evan Van and Cailin Cooke. Support these athletes by watching the competition online through World Taekwondo’s YouTube Channel! Taekwondo Canada will also be updating their website and social media with live stream reminders and results.