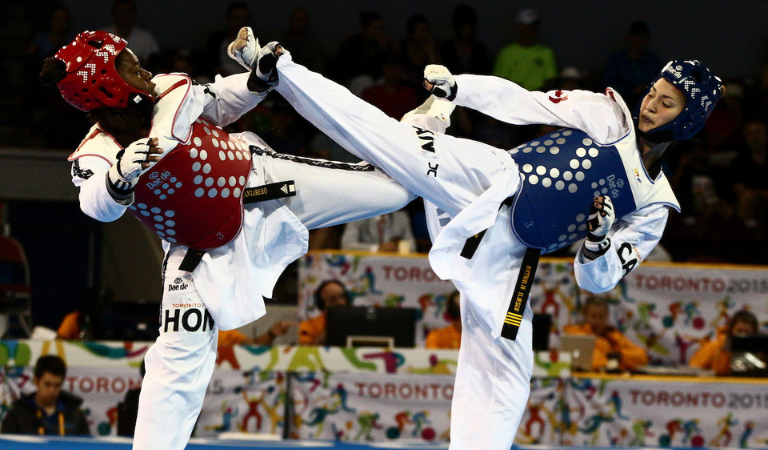 High Performance (HP) is a widely used phrase across sports in Canada. What is harder to find is a clear definition of what exactly that term means. While there will understandably be sport-specific differences, we believe that there are three questions that underpin how to define HP in taekwondo:

“Even though it is recognized by all practitioners around the world that the sport of taekwondo has undergone several evolutions, and continues to change on an annual basis, it is important to recognize how Taekwondo Canada has adapted to these changes over the last half- century. Our organization has not only kept up with the times, it has achieved some significant milestones that are worth celebrating. All members of Taekwondo Canada should hold their heads high that we have sent athletes to every single Olympic Games since taekwondo was introduced to the world for the first time as a demonstration sport in the 1988 Seoul Olympic Games. Since then, Canada’s taekwondo athletes have proudly represented the country in every major international competition recognized by World Taekwondo, in civilian, para and military competitions. As we look forward to seeing the sport evolve to attract new members, thrill audiences, and play an important role in maintaining and improving our mental and physical health, let us not forget our roots.”

Nationally, we have a complete dependence on the club system to provide a population of talented athletes with the appropriate development and skill sets necessary to compete for medals on the international stage. Reflecting on the six Olympic cycles since taekwondo was added to the Olympic Games, Canada continues to send between one and three athletes and generates between zero and one medal. Looking at Olympic results up to the 2020 Olympic Games, countries in the top 10 total medals are consistently qualifying three or more athletes with an athlete to medal conversion rate of 53% (South Korea’s results were not included in these averages as they have won twice as many medals as any other country which substantially skews the comparison). Countries ranked 11th to 20th in total medals for the same time period are consistently qualifying two or more athletes and converting at 40%. Up to the 2020 Olympic Games, Canada currently ranks as the 26th country in total medals won and has been able to convert qualified athlete numbers to medal count at a rate of 20%. While this is not a deep dive into the state of Olympic level taekwondo, this basic analysis highlights our need to transition more athletes towards Olympic qualification, as well as improving the quality of those qualified athletes.

The 2021-2024 Strategic Plan clearly articulates the aim of the HP pillar as helping athletes to transition along the Podium Pathway towards Olympic success. We need to value, respect, and recognize the incremental steps it takes to become an Olympic medallist while not losing sight of our ultimate goal. As a starting point, our domestic system should be looking to build over multiple Olympic cycles and work towards qualifying at least one additional athlete each quadrennial, and at the same time support those athletes to ensure that they have the greatest chance of converting to a medal opportunity at the Olympic Games. Taekwondo Canada needs to invest in three main areas in order to help support our domestic athlete development system and improve our medal opportunities at Olympic Games:

The nature of the investment won’t always be financial, but will include time, energy, and support in key areas such as: national coach development, national team development, enhanced training and competition opportunities, athlete monitoring, and an internal ranking system. Much like a Podium Pathway for athlete development, Taekwondo Canada’s approach to achieving our aim will build over time through incremental steps. With all of this in mind, Taekwondo Canada (and in accordance with Sport Canada guidelines) defines HP as:

Taekwondo Canada recognizes that the pursuit of HP is a continuum, and that the above definition encompasses more than Olympic medal performances. Therefore, HP is viewed based off three tiers of criteria in the following priority order:

The foundation of the HP definition is an understanding of how we can identify those athletes that are showing the potential to achieve HP. Athletes demonstrating progression towards this standard are considered to be on the High Performance Pathway (HPP):

In no particular order, an athlete may be identified or targeted as having potential to achieve HP if:

These above indicators of an athlete on the HPP are not intended to be exhaustive or restrictive. There may be less conventional routes that apply to circumstances, such as a late developing athlete. However, outside of achieving the performance indicators, a significant performance at a Senior World Championships would be required to be identified as a HP athlete. As part of being identified as a HP athlete or identified as being on the HPP, there is an explicit requirement that the athlete has an Olympic program event training focus. The athlete would adhere to a Yearly Training Plan, with annual progression towards a targeted Olympic program event.

Aside from defining HP and the HPP, it is also important that we clarify what it means to be World Class. Much like how we individually interpret what it is to be HP, being World Class is used in many different ways, as it is a quality not a standard. That being said, Taekwondo Canada defines being World Class as:

World Class – “The embodiment of the decisions, actions, and daily approach towards achieving your goals of becoming a HP athlete.”

While Canada may not have a large population, we do have a proud history in the sport and a domestic club system that has consistently produced Olympic calibre athletes. However, if we are truly looking towards the future of being recognized as a HP taekwondo nation with a deep talent pool and established HP athletes, our population demographics require that we all work together and share the responsibility of achieving our HP goals.