Ottawa, ON (May 6, 2022) – In three days of action-packed competition at the 2022 Senior Pan American Championships Team Canada contested in 20 divisions across Kyorugi and Poomsae disciplines. The team concluded the competition with one gold, five silver, and seven bronze for a total medal count of 13 medals.

Due to pandemic limitations for event scheduling and confirmation, Taekwondo Canada, coaches, and most importantly, the athletes endured a very busy two weeks to qualify athletes and have them prepared to travel. The Pan American Taekwondo Union (PATU) hosted the 2022 Senior Pan American Championships at the Barceló Bávaro Palace Hotel in Punta Cana, Dominican Republic from May 3rd to 5th, 2022. This international competition featured events in both Kyorugi and Poomsae disciplines.

With new Kyorugi competition rules being announced and coming into effect June 1st, Taekwondo Canada took the opportunity to host their qualification event under this new format anticipating that PATU would follow suit for the event. With being the only country to attend with experience under the new rules and event format, Team Canada felt they had a distinct advantage going into the Championships.

Team Canada’s Kyorugi team was led by Skylar Park in the Female -57kg division, defeating Argentina, Puerto Rico, and Brazil, all with Park taking the first two rounds in the best of three scoring system on her route to the gold medal. Following Park’s gold medal performance were teammates Vivane Tranquil and Hervan Nkogho Mengue earning the silver medal in the Female -49kg and Male -68kg divisions respectively. Tranquil fell in the finals in a tough match against the number one seeded athlete of Mexico in her division and after strong performances in all his matches, Nkogho Menuge lost his final match against the host country of Dominican Republic. Rounding out Team Canada’s Kyorugi medals were bronze medalists Melissa Pagnotta (F-67kg), Nicholas Hoefling (M-54kg), Braven Park (M-63kg), Taeku Park (M-74kg) and Jordan Stewart (-87kg).

Taekwondo Canada’s High Performance Director, Dr. Allan Wrigley shared his thoughts on the National Team and their performances, “While we will obviously celebrate the medals, what is more promising to me is how close we were to many more. I am extremely optimistic about what our Senior Team will be able to do in the future. We have veterans setting the tone and demonstrating the professionalism that is required in the sport, newcomers stepping up and performing in difficult draws, and an exceptional coaching group that understands how to work as a team.” 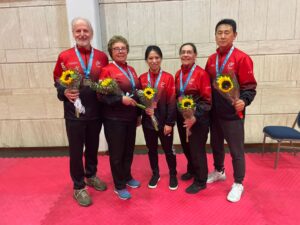 Taekwondo Canada would like to congratulate and thank all the athletes and support staff that attended the 2022 Senior Pan American Championships!

Full Team Canada results can be found below. Please click here for complete results from the 2022 Senior Pan American Championships.