Montreal, QC (August 30, 2022) – La Fédération québécoise de taekwondo WT (Taekwondo Québec), together with Taekwondo Canada and Chong Lee Taekwondo, invited members of the media to a press conference to announce the awarding of a prestigious honorific 10th Dan to one of the sport’s pioneering leaders in Canada, Grand Master Chong Soo Lee.

In an historic gesture, the World Taekwondo Federation and the Kukkiwon (Taekwondo’s parent organization) presented this 10th Dan to Grand Master Lee’s family. This is the first time such an honorary degree has been conferred in Canada. 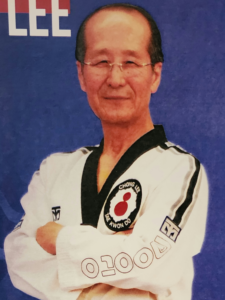 “Grand Master Lee’s vision for taekwondo in Canada had no equal, as was the case for his exceptional involvement and dedication to the development of taekwondo in Canada and beyond, always based on the strongest spirit of teamwork. Having spoken to people from all over the country, I realize what an important legacy he has left to Canada and to the world. The honour bestowed upon him is highly merited, and reflects the respect in which he is held by all members of the taekwondo community.” Dave Harris, Director of Taekwondo Canada.

“We are all extremely happy to learn of this important honour, a distinction that is very deserved. With this award, Grand Master Lee, 10th Dan, continues the proud legacy for the taekwondo community in Quebec. What he has built is remarkable and strong! We are proud to carry forth the high standards of his taekwondo teachings, as well as his values, across Quebec. The dedication and discipline of the Quebec taekwondo community owes a great deal to him as a builder.” Jean Faucher, President of Taekwondo Québec

“We wish to thank the Quebec and Canadian federations for the efforts invested in obtaining this recognition. Thank you also to the media for helping us to spread the news of this important honour all over Quebec! Grand Master Chong Soo Lee always said that Taekwondo is ‘a way of life.’” Evangelos Lygeros and Sheila Lee, Chong Lee Taekwondo