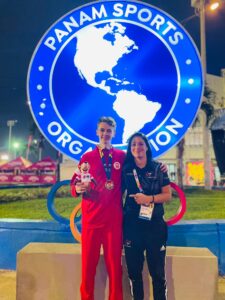 After matches against Haiti and Colombia, Nicholas Hoefling defeated Guatemala with a score of 9-4 to earn a bronze medal and Canada’s first medal at the Junior Pan American Games.

Hoefling commented on his experience at the Junior Pan American Games and what this medal meant to him:

“A bronze medal at my first multi-sport games is a big milestone. I’m very happy to bring back a medal to my teammates and family at home who have supported me so much. Now I’m hungry to compete and I’m hoping to bring home gold next time.”

“Nick’s performance on Friday was great, he surely wanted to get the Gold, however achieving a Bronze medal was an outstanding achievement! I feel very proud of him and we are honoured to have been part of the first Canadian Team for the Junior Pan American Games.”

Fellow teammate, Josipa Kafadar, competed in the Women’s -49kg division with Daniel Thronton in her coaching corner. Kafadar fought her Quarter Final match against Colombia and narrowly missed the victory, with Colombia taking the match 9-6.

The Cali 2021 Games are the first edition of the Junior Pan American Games. These Games are an opportunity for athletes of the Americas, 23 years-old and younger, to continue their development as they aspire to one day compete at the Pan American Games and Olympic Games. The Games run from November 25th to December 5th , 2021 and feature 41 countries with nearly 4000 competitors.

“Taking part in the inaugural Junior Pan Am Games is an honour and we are proud of the athletes and coaches that represented Canada. Congratulations to the team on their performance and efforts!”