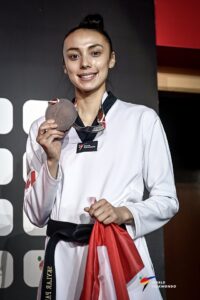 Seeded third in the women’s -57kg division, Park received a bye through the Round of 16. With a 2-0 quarterfinal victory against Poland’s Patrycja Adamkiewicz, Park advanced to the semi-final round. In a close fight against Turkey’s Hatice Kubra Ilgun, Park fell 0-2 to the second seed and moved on to face Morocco’s Nada Laaraj in the bronze medal match. Park scored a headshot to take the first round and maintained an aggressive approach throughout the second round to win the match 2-0, earning herself a bronze medal and her first Grand Prix Final podium.

World Taekwondo invited the Top 16 athletes across four men’s and four women’s Olympic Weight categories to the two day Grand Prix Final event in Riyadh, Saudi Arabi at the Green Halls from December 9th to 10th, 2022. A total of 128 athletes from 40 countries, plus a Refugee team, competed for medals and crucial Olympic ranking points towards Paris 2024. This also marked the return of the Grand Prix Final event after the COVID-19 disruptions.

Canada’s Coach Carla Bacco shared her thoughts on the world class event, “The Grand Prix Final in Riyadh was a great event to be part of. The competition was tough, but we took advantage of the opportunity to compete amongst the Top 16 Olympic rank athletes in the world. After a two year break from this event, it was nice to be back.”

Alongside Skylar Park, were fellow Canadians Ashley Kraayeveld (Mississauga, ON) and Nicholas Hoefling (Campbellville, ON). Kraayeveld came up short in the Round of 16 of the women’s -67kg division against Spain’s Cecilia Castro Burgos. Hoefling lost a difficult Round of 16 match against the eventual men’s -58kg division gold medalist, Jun Jang of Korea.

Taekwondo Canada’s High Performance Director Dr. Allan Wrigley commented on Canada’s performance at the event, “With the Grand Prix Final happening just a few weeks after the World Championships, it really challenged our coaches and athletes to reset and prepare to perform at their best again. Our top athletes showed a lot of determination in their matches and fought extremely well. Skylar Park finishing with a Bronze and her first Grand Prix Final medal has capped off what has been a tremendous season for her.”