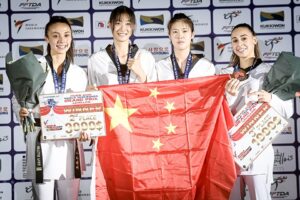 Coming off a bronze medal at the Rome Grand Prix last June, Park had her eyes set on a podium repeat. The Winnipeg native fought her way through matches with Chinese Tai Pei’s Chia-ling Lo in the Round of 16, Great Britain’s Aaliyah Powell, and China’s Lijun Zhou in the Semi-Finals to set up a rematch with Zongshi Lou of China. Park last fought Lou in the Semi-Finals at the Rome Grand Prix. Lou won the first round of the Final match with a score of 4-2. In a close second round, Park fell to the gold medalist in the last 20 seconds of the round and lost the match 0-2, earning Canada a silver medal.

Canada’s Viviane Tranquille and Ashley Kraayeveld also earned victories at the Paris event. Tranquille was strong in her Grand Prix debut against the host country’s Maysane Kamkasoumphou in the Round of 32 and was eliminated in the Round of 16 by Croatia’s Lena Stojkovic. Kraayeveld defeated a familiar face in Canada’s Melissa Pagnotta in the Round of 32, but lost a tough match against France’s Magda Wiet Henin who was ranked 2nd in the World.

Taekwondo Canada’s High Performance Director Allan Wrigley shared his thoughts on Canada’s performance, “This is a tremendous achievement for both Skylar and her coach Master Jae Park. It marks yet another step in her progress as one of the top taekwondo athletes in the world. We are also extremely proud of the improvements you can see that our other athletes are making at the WT Grand Prix events. It’s an exciting time for taekwondo in Canada as these athletes continue to show how we can compete on the world stage.”

The next World Taekwondo Grand Prix event will be taking place in Manchester, England from October 21st to 23rd, 2022.