OTTAWA, ON (June 6, 2022) – Team Canada’s Skylar Park captured a bronze medal in the Female -57kg division at this weekend’s World Taekwondo Grand Prix at the Foro Italico in Rome, Italy.

Park was dominant in her first two matches against Spain’s Marta Calvo Gomez in the Round of 16 and Morocco’s Nada Laaraj in the Quarterfinals, winning both in the new best of three rounds competition system by 2-0. Park advanced to the Semi-Final to face China’s Zongshi Lou. After a tough match, Park fell to the eventual gold medalist 0-2 and walked away with a bronze medal for Canada. 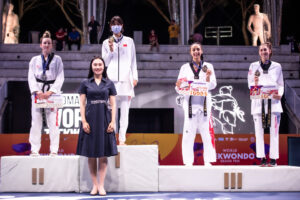 Yvette Yong was another Team Canada athlete who earned a win at the Roma Grand Prix against Israel’s Rivka Bayech with an impressive 2-0 performance. After an exciting action-packed match against Italy’s Sarah Al Halwani, Yong dropped her match in the Round of 16 by a final score of 1-2.

“With an abbreviated lead-up to the 2024 Paris Olympics, the Grand Prix events are critical for the Olympic qualification process. The event in Rome featured the strongest and deepest = international field since the Tokyo Games and provides our coaches and athletes with invaluable information to bring back to the training environment.”

The next World Taekwondo Grand Prix event is set to take place from September 2nd – 4th in Paris, France.