On Saturday, the Pan-American Taekwondo Union (PATU) held their elections for Council member positions throughout North, Central and South America. Taekwondo Canada is pleased to announce that current Board Vice-President Wayne Mitchell has been named Vice-President for North America with PATU.

Mr. Mitchell, a native of Yorkton, Saskatchewan, was a former President with Taekwondo Canada from 2015 to 2019 and has been a current member of the Taekwondo Canada Board of Directors since September of 2020. Over the years, Mr. Mitchell has been a strong leader for taekwondo in Canada and campaigned for the PATU vice-presidency on a platform of transparency and good governance within the sport. 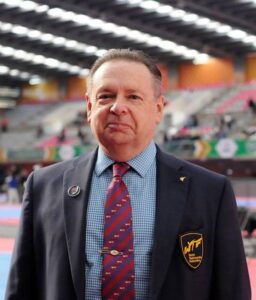 Mr. Mitchell said of his appointment,

“PATU is an organization for the MNA [Member National Association] and their members. I have always felt that my contribution to Taekwondo organizations has been one of servitude to those that have entrusted me to work for them. PATU should not be a one person or even a small group show. It requires a whole support team pulling in the same direction to be successful”

“Taekwondo Canada is pleased to recognize Wayne Mitchell for being named to the PATU Council. His experience and drive towards goals that will better serve taekwondo not only in Canada but throughout PATU cannot be denied. I believe that his experience will serve him well in his new position.”